For now, all eyes are on the extraordinary spectacle of a televised attempt to impeach Donald Trump. Yet only a year from now, the presidential election will be over, the votes counted and the victory speeches made.

By whom? Most polls currently suggest it will be a Democrat who finds himself or herself huddled with a transition team while Mr Trump contemplates a return to his newly chosen home state of Florida. My advice is that anyone planning to bet their house on such an outcome had better line up a friendly neighbour with a spare room, just in case. For one thing, we don’t yet know who the President’s opponent will be. In my research among American voters since 2016 I have found Democrats to be in a furious and increasingly radical mood. 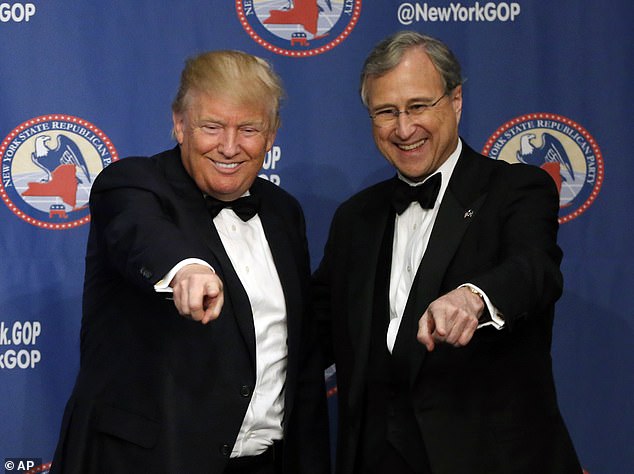 The disdain showered on President Donald Trump (pictured with State Republican Chairman Edward F. Cox on April 14, 2016) may backfire as many Democrats feel they are going to have to make some kind of compromise in time for the upcoming election 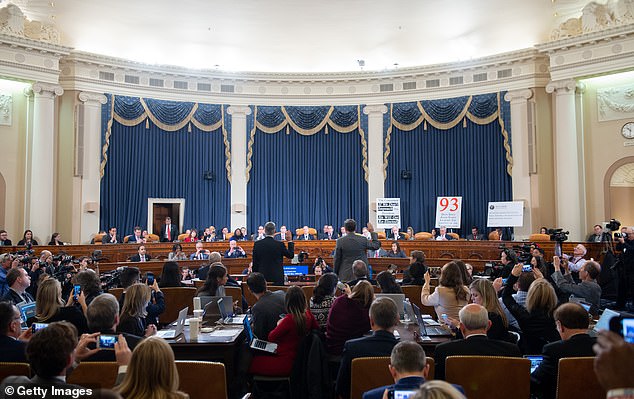 Rather than reach out to those who backed Trump – even if they did so reluctantly – many have yearned to head in the opposite direction and adopt the most progressive candidates and platforms they can find.

However, in my latest polling and in focus groups of voters likely to take part in New Hampshire’s Democratic primary early next year (part of the process of selecting a candidate for the party), I detected a subtle shift in the mood. This and other primaries are starting to concentrate minds: with an election looming, many Democrats feel they are going to have to make some kind of compromise.

What kind of compromise will it be? I found very little enthusiasm for any of the frontrunners. Former Vice President Joe Biden is touted as the safe choice, but our participants thought he lacked new ideas and that the 76-year-old has been showing his age with increasingly regular ‘senior moments’. 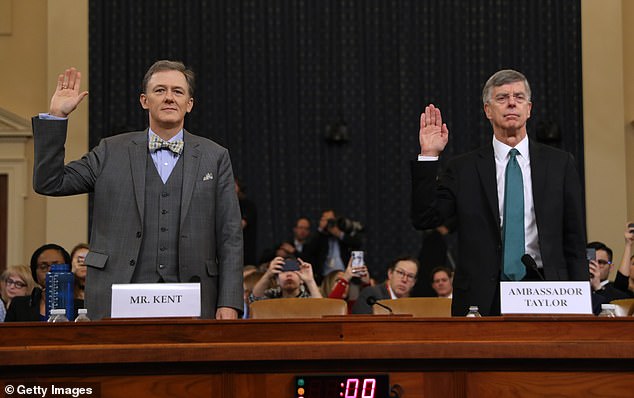 Many wondered why, after eight years alongside him in the White House, President Obama has not endorsed him. While there is still affection and respect for the 78-year-old socialist Bernie Sanders, potential backers worry about his age and health (‘you’d be voting for his VP [Vice President]’ was a refrain we heard more than once), and how he would fund his free healthcare and college plans.

This was also a problem for Elizabeth Warren, 70, whom few had warmed to, though she seemed capable. She was described as ‘shrill’ and many found her claims to have Native American ancestry – she controversially released the results of a DNA test last year – bizarre. The candidate most often mentioned positively was 37-year-old Indiana mayor Pete Buttigieg, whom several found smart, constructive, impressive and likeable, though some worried about his relative youth and inexperience, and whether his ‘preference’, as they often put it, might be a barrier with some voters. ‘I’m not sure the country is ready for a gay President with a First Man,’ as one told us. 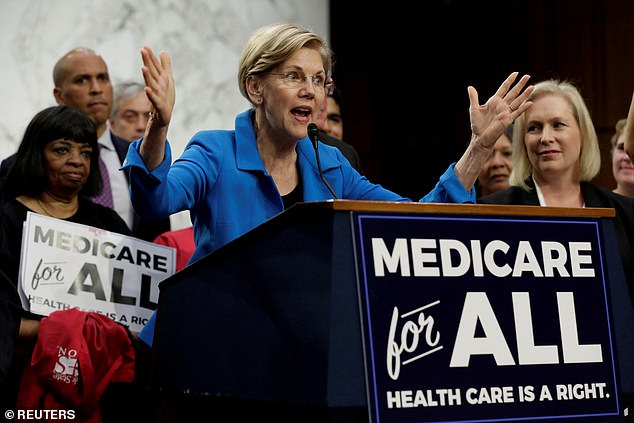 Elizabeth Warren has been described as ‘shrill’ and many found her claims to have Native American ancestry, which she released, as ‘bizarre’ and she has struggled to get endorsement (pictured during ‘Medicare for All Act of 2017’ on Capitol Hill in Washington). She is not expected to be a frontrunner

One of the many things the nominee will have to do better than last time is enthuse those who traditionally vote for the Democrats but don’t always make it to the polls.

Listening to African American voters in Atlanta who had voted for Obama but stayed home in 2016, it was clear that this was by no means a done deal. Many felt that Hillary Clinton had taken their votes for granted at the last election and that she, therefore, had not deserved them. And while some were now prepared to turn out for anyone to oust Trump, most were clear that their support would need to be earned.

Nor would choosing a minority candidate necessarily be enough in itself: ‘With them it’s often “I’m black, so get the church buses lined up,” ’ one man complained. 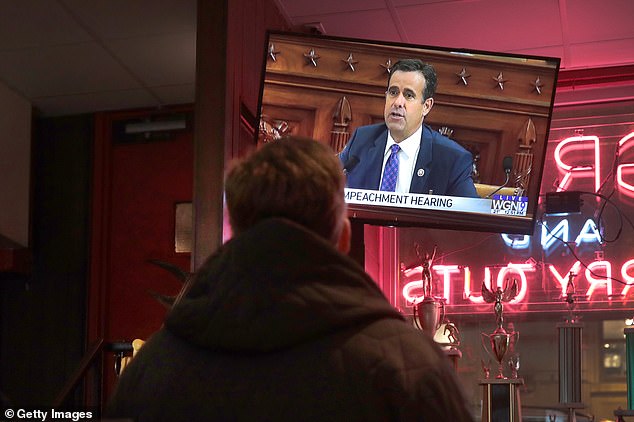 With a potential television audience of tens of millions looking on, the two witnesses were questioned for hours  (pictured is the hearing being shown in a the Billy Goat Tavern in Chicago, Illinois). Some Trump voters undoubtedly see the allegations as serious and worthy of investigation, but the more general reaction is: ‘Oh, again?’ and it might take some convincing to show people it amounts to more than a witch hunt

There were also potential clouds on the horizon for Biden, whose support for Bill Clinton’s tough crime and welfare reforms counted heavily against him with some: ‘A lot of people are still in jail now because of what he did.’

And that’s just the Democrats! To get to the White House, the eventual nominee will need to convert a number of those who voted for Trump three years ago. On the face of it, this should be eminently doable: while Trump voters as a whole are pleased with his record on the economy, tax, foreign affairs, trade, immigration and on the appointments he has made to the Supreme Court, many are weary of his antics and some worry about what a second term would bring.

Those who switched from Obama in 2012 to Trump in 2016 – who are crucial in the key states of Pennsylvania, Michigan and Wisconsin – are notably less committed to the President than most of those who elected him. They are open to an alternative. They are not tuned in to the circus of the Democratic primaries and why would they be? ‘Wake me when you have a nominee’ is their current position. But broad messages do drift across from the blue – Democrat – camp. 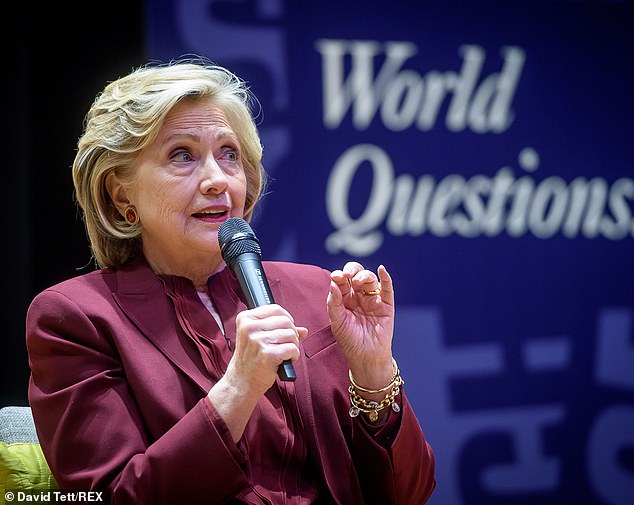 Meanwhile many people have felt Hilary Clinton (pictured on November 13) had taken their votes for granted at the last election and that she, therefore, had not deserved them. This public opinion would suggest she is not a frontrunner for the election looming

The most ubiquitous of these, according to the currently undecided former Trump voters we spoke to in Pittsburgh and in the suburbs of Georgia, is ‘free this, free that’. While healthcare is one of their biggest worries for their own families, when it comes to the potential tax implications, policies such as Medicare (healthcare) for all and free college sound, well, expensive. Suburbanites may yet decide they like their hard-earned dollars more than they dislike Donald Trump’s Twitter feed. Trump waverers are also well aware that, three years on, many Democrats still regard them as a ‘basket of deplorables’ (the phrase coined by Hillary Clinton) for having had the temerity to vote as they did. This still rankles and makes it harder for the party to recruit them.

Democrats ‘preach compassion and understanding, but only if you agree with them’, as one uncommitted former Trump voter put it to us. And while many still see President Trump as a change in the right direction – even if only his most committed loyalists like the way he goes about things – today’s most likely Democrat alternatives sound like a change in a backwards direction (Biden) or a change in a wrong and potentially threatening direction (Elizabeth Warren, Bernie Sanders). Imperfect though the incumbent may be, neither restoration nor revolution particularly appeal to the waverers. 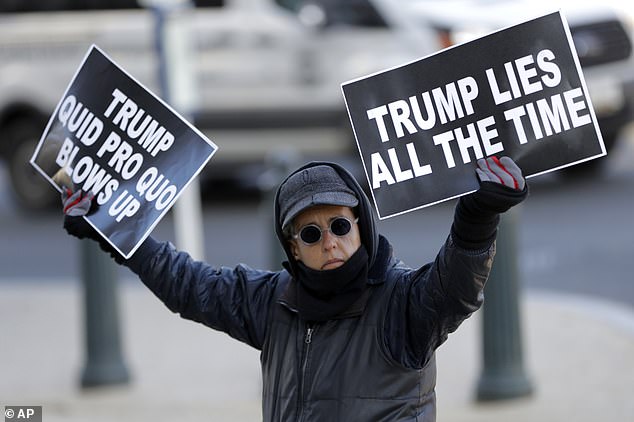 Most Democrats, meanwhile, can hardly wait for Trump’s impeachment to unfold in the hope that, even if the Senate fails to convict and remove him from office, voters will see what a terrible candidate he is. Surely now his voters would see the light and recant, they say to themselves – as they do after every presidential controversy.

But some worry that impeachment will simply galvanise Trump’s supporters and, on the basis of what we heard in our research, they have a point. Some Trump voters undoubtedly see the allegations as serious and worthy of investigation, but the more general reaction is: ‘Oh, again?’ Trump’s every move since inauguration day has been treated as a national scandal so they will take some convincing that this latest furore amounts to more than a continuation of the ‘witch hunt’. It is a good example of how the president’s opponents’ disdain for him – and, by extension, for his voters – might detract from the business of convincing moderate and reluctant Trumpers that the Democrats offer them a better future. The story sounds somehow familiar – and we know how it ended last time.

I’m A Celebrity: James Haskell is voted out of the jungle