A suppressed parliamentary report has found it is impossible to tell if Russian interference had any impact on the Brexit referendum result.

Parliament’s cross-party Intelligence and Security Committee (ISC) has been investigating allegations of Russian interference in the electoral system for the past 18 months.

The report – that will not be published prior to the election on December 12 – could not say if illicit Russian activities impacted the 2016 referendum, as reported by The Sunday Times. 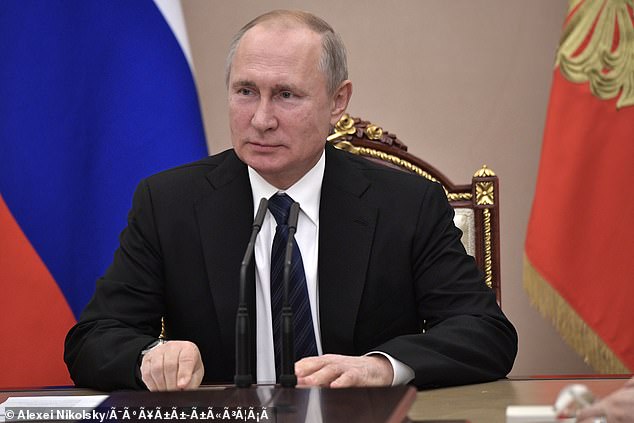 Russia’s President Vladimir Putin at a meeting of the Security Council of Russia, earlier in November at the Kremlin

The ISC report is understood to criticise the British intelligence services for not devoting enough resources to tackle the danger posed by Vladimir Putin’s Russia.

The as-yet-unreleased report is also thought to focus on anti-EU articles disseminated by RT and Sputnik, both state-sponsored media outlets.

More than 260 articles focused on the referendum were tweeted out by the respective outlets in the six months prior to the referendum.

Chairman Dominic Grieve says a report was sent to the Prime Minister for approval on October 17 – but will not be published before December 12 amid claims it is being ‘sat on’.

Ministers have said the apparent delay is just down to normal processes being followed.

Last week Hilary Clinton joined an increasing chorus of people calling for the government to release the probe into Russian interference.’

She said: ‘I’m dumbfounded that this Government won’t release the report about Russian influence. Because every person who votes in this country deserves to see that report before your election happens’.

Emily Thornberry, Labour’s shadow foreign secretary, said: ‘If it is correct that our security services have been unable to reach a conclusion about the extent or impact of Russian interference in the 2016 referendum, then it raises serious questions which require serious answers,’ she said.

‘Boris Johnson therefore needs to clear up the confusion, spin and speculation around this ISC report by publishing it in full at the earliest opportunity.’

Trump plans to designate Mexican drug cartels as terrorists over their role...